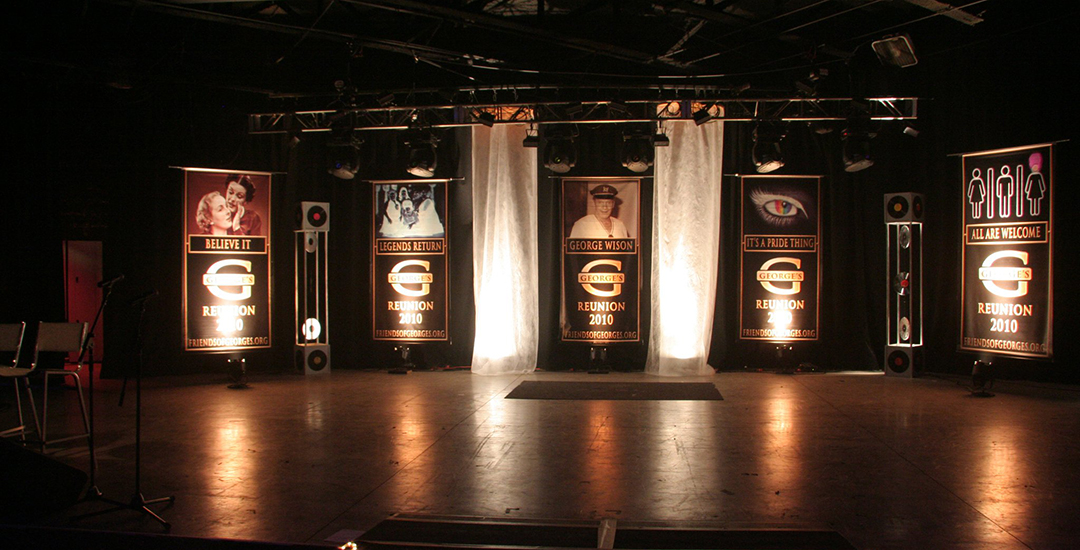 George's Reunion stage
In 2009, Tracy Love found some old photographs taken at a place from which he had fond memories of his past: George’s Disco.
Not sure exactly what to do with them, he decided to make a Facebook page and post some of the photos, thinking there may be some others who might enjoy seeing them.
What he did not count on was the outpouring of attention the photos would receive. Not only did others comment on the photos, they began posting their own photos from their George’s Disco era. They posted memories of events that took place and the people they knew.

As the momentum grew, Tracy began to think that maybe it would be a good idea to get people together for a “reunion” of sorts. He began gathering a group of former George’s patrons and performers to put together an evening of music and memories. This planning committee became the original board of Friends of George’s.
After looking at multiple venues and as interest in the event grew, the planning committee decided on Minglewood Hall, located in the heart of mid-town Memphis.

Thank you to the GEORGES REUNION supporters for bringing back our freedom..our friends….and the best party ever thrown…called GEORGES! Scotty James

On October 22, 2010, over 1800 guests came together to commemorate not only the legacy of George’s Disco, but to celebrate our community and our future together. The energy in the room was electric and it was a once-in-a-lifetime night to remember.